Ban on export, sale of endangered fish during breeding season

The selling, exporting and consumption of beche-de-mer, undersized fish, kawakawa and donu (grouper) will stop from next year between June and September.

This is one of the four sustainable initiatives that the Ministry of Fisheries will take to carry out the promise made by our country under the Sustainable Development Goal 14, “Life Under Water”.

Stoppage for fishing, selling, exporting and consumption of kawakawa and donu.

Stoppage of the export of beche-de-mer.

Stoppage of sale of undersized fish.

The limitations of long line fishing is 10 nautical miles from the barrier reefs. If this does not work, it is subject to change to 15 nautical miles.

Mr Koroilavesau explained that the Ministry’s purpose for making such decisions is to conserve our marine life.

“We need everyone to know that the marine population is depleting,” he said.

The ban to stop the export of beche-de-mer started two months ago but failed as the Ministry had received complaints from exporters stating that they still had stocks in their stores.

Mr Koroilavesau said the Ministry had given these exporters a grace period of two months and will now ensure that traders do not have any stocks left in their stores once the ban will be enforced again.

The regulations for the sale of undersized fish are currently being reviewed, according to him.

“The local population had raised the issue of long line fishing near the barrier reefs.

“We want to carry out initiatives to relieve the pressure from the interior coral system and redirect our fishermen to fish outside the barrier reefs,” he said.

He added that most of the fish sold in our markets and roadsides are not yet matured or are caught during the spawning period.

Therefore this has affected the life cycle of our marine life causing our resources to decrease in supply.

Mr Koroilavesau said the Ministry will also work in conjunction with the Ministry of Local Government and Police Force to regulate and monitor places such as the markets and roadsides. 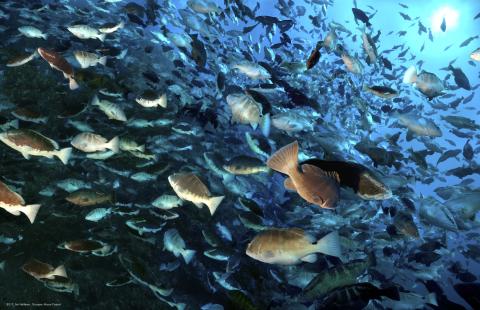